How many drafts does it take?

As I browse through my online profiles, I realize that I haven't updated my blog. IN 5 MONTHS! Geez, my online life really has fallen behind. I'm not proud of that.

So, what has been keeping me busy? I'm glad you asked:

During NanoWrimo 2015, I wrote the majority of "Omega Noir: Ascension", which was the first of my magical fantasy series. During 2016, I finished the manuscript and began editing it, and really liked where it was going. However, while writing "Omega Noir: Chaos Cast" (#2), and editing what I had of that, I realized two things:


So I started a 2nd draft of Omega Noir (#1), and got about 70 pages in, but I realized I was doing the same thing: making sucky villians and building up plot holes. Additionally, the story didn't flow the same way, and lost even MY interest.

Hence, I began Draft #3. This one has a better hook, explains as it goes, and keeps on moving. I'm already 56 pages in, and so much has already happened, with a lot more to go!

My job in Japan has me teaching at 4 different schools: 2 elementary schools (1-6 grade) and 2 middle schools (7-9 grade). My job: Teaching (or assisting in teaching) the English Language.

Luckily, the programs have already been planned out, so all I have to do is show up, maybe bring an activity, and be active. It's not the hardest job in the world, but it is technically the first 8-5 job I've had.

While teaching English during the day, I'm also teaching HTML by night (well, late evening). I still have my job with AB Tech, and I'm so happy that AB Tech was willing to let me keep my job while across the world. I've had to do a lot of video recording (and editing) as my course is completely online, so I can't just show up and talk for two hours like I did before.

Japanoblog has become a big part of our lives. While in Japan, we have traveled around the area, including Tokyo and Kyoto, documenting different adventures, sights, foods, and more. Although we still have to work on the weekdays, it's nice to get out and share our adventures with our fans.

Getting the cats to Japan (after the paperwork) was easy. However, shortly after we arrived, the cats got fleas. We're still not quite sure how, because they never had fleas in America, and we didn't bring them. But somehow, they got fleas, and we've been fighting them ever since. The two of them fight like siblings and we keep them fed and watered, and they like the treats that Japan has to offer.

During some nights, Maru will come into the bedroom and sleep on our heads (or lick our faces) while Chi traps us under the blankets. Other nights (or days), neither of them will enter the bedroom, and when we drag them in, they immediately dash out. No idea why.

Comapring Japan to America is like night and day (which, since we're 14 hours ahead, can be a literal definition). There are many things in Japan that are different from America, such as traveling, paying bills, bank accounts, phones, and more. We'll do an article/video on Japanoblog and talk about that in detail. 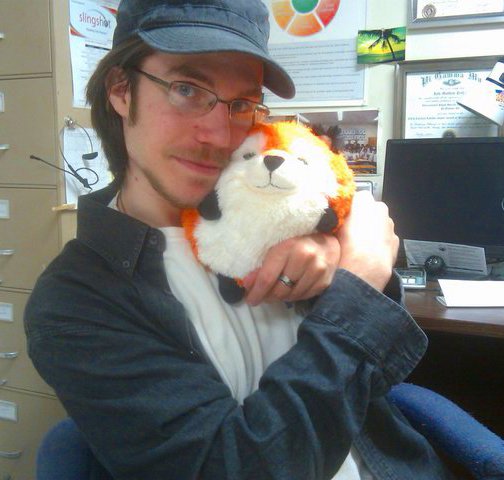