This has been one great day! I submitted an article to the popular social media site SocialMediaToday.com and I can't believe how much it has spread across the corners of the 'net. I submitted it less than 24 hours ago, and it has received more retweets and shares than I can track!

Here's a quick overview:
On SMT, it has 109 LinkedIn shares, 12 Facebook Shares, and 97 Tweets 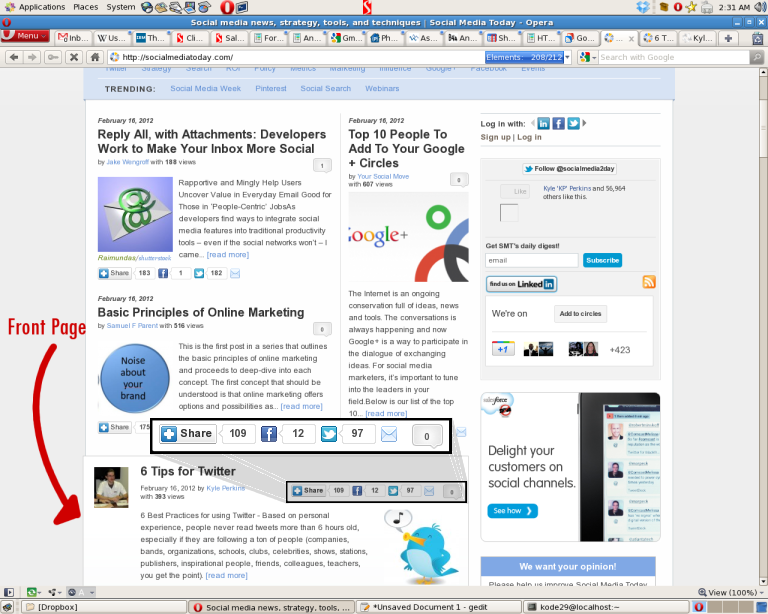 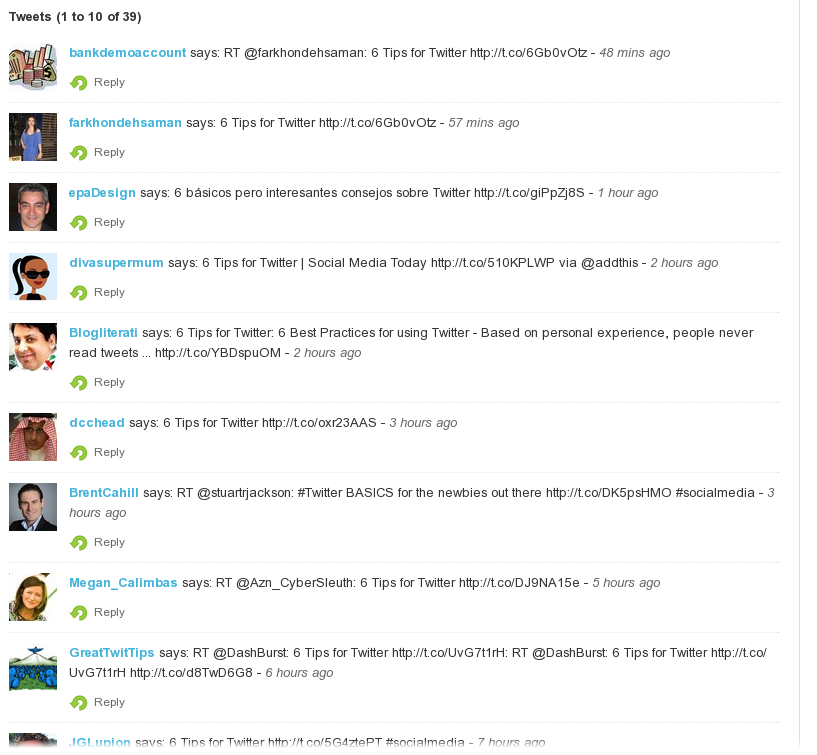 I know some of the other big-wig article writers have somewhere around 1k shares, but for my first article published outside of the company website, I call 257 shares within 24 hours a success!

Not too bad for an article that was a quick idea and written in about 3 hours!

I thought I could make this update last week during my actual birthday (Wednesday), but last week was extremely looooooooong for me and Keat. Her aunt passed away last Sunday, and we traveled 480 miles across North Carolina from Waynesville to Nags Head on Tuesday, which was one of the longest trips I ever made (especially since we left after Keat's class was done at 2). Once we arrived, we crashed for the night and went to the funeral on Wednesday (which was very emotional, by the way, but I never went to a funeral on my birthday before), left for Tortuga's Lie (great seafood restaurant, and it was Sushi night, so I got some Sake!) we were all tired and left Thursday morning to drive 480 miles back to Asheville on Thursday. With the addition of the traveling from Nags Head to Columbia (NC) and back (and back to Asheville), it was close to 1000 miles in 1 week. I kept getting the notion from Keat's mom asking if I had a funeral on my birthday before. I kept saying "No, but I've had a Physics test before", and that happened about 4 times.

After we came back, our new friends in Apt #1 (Jen and Ty) invited us over to their place for beer and monopoly. That was very interesting, especially since Keat and I had about 4 beers each (which is a lot for us). We also cleaned up the apartment on Friday, which helped out a bit.

Our friend Kat invited us to Biltmore Estate on Saturday, which was very fun, but I don't want to walk around for 7 hours anymore. My legs still hurt from Saturday.......ow.

I got to work this morning at 7:45am, and still here at this hour. I finally figured out why the 3rd IP address wasn't added to my account (when I ordered it on Feb 9th) - it was because the order got stalled.....again. It seems like that is a recurring theme on my account: orders will stall and require an extra "push" from an Admin before it can successfully be processed. After getting that canceled and re-submitted, it was a fairly eventful day, with the education and installiation of the Intuit credit processing for EAUC, the status updates and video production for NSMT, the SEO Seminar preparation, and the sudden loss-of-internet for about an hour at the office (the county came over and tried to do something (I don't know what they were doing), and when they were working, the internet went out - found out about 20 minutes later that the College lost their connection, so the whole county was out for about an hour). What a day. I'm going home now to rest.....

One last thing: I found out that I'm (should be) in a book! It's called "Starting Your Career as a Freelance Web Designer" and it's available via Amazon! It is scheduled to be published in August, so I can't wait till it comes out.

I also made a logo for Zoomiform (aka: Business Accelerator) and registered the domain for it, and an official logo for Infinity.

Also, you would think that since Intuit is one of the biggest credit processing and accounting companies in the world, their online credit processing procedures would be easy. YEAH RIGHT. Unlike Sage (which NSMT used), Intuit is extremely difficult to integrate. They want you to use THEIR systems or nothing at all. So I'll be spending the next few days trying to figure out how to do that properly. I found a nice little PHP DevKit for Intuit systems, and got it to successfully return a test environment, and now have to figure out how to make it live and work with real funds. That should be fun. Night!

Headin' to a Party!

It feels like forever since I posted last, but I thought I'd get an update in before I head to a friend's party tonight.

I've been working on the NSMT alert system, and it keeps bugging me how something works so perfectly on our end (we've even tried to break the system, and it still worked), but it doesn't work on the remote end. I can't really determine the issue and it's becoming harder and harder to figure out what the issue is if the end-user doesn't let us know if something is causing it or what their environment is for their system. It could be anything from a simple security setting to browser restrictions to Admin settings to anything! We don't really provide Tech Support (and this is one of the main reasons). I've been down that road and it baffles my mind how some technology users can be so oblivious about something so simple (it's like someone calling a car mechanic and saying "My car is going WHIRR - fix it!" when the car is sitting in the driveway - impossible to diagnose from remote and impossible to fix if if the problem can't be determined).

I'm also working on some training videos, and found how how YouTube works with privacy settings. I originally uploaded a video and posted it online, but found out that the video was only available to me and my friends. I tweaked that and found out how to make it public, but private. I was also asked how to increase the volume and told them how to increase it via the YouTube application (I told them "we didn't design it, so we can't change it"). I told them that the volume works fine on our end at 30% with and without headphones, so I can't tell what their problem is.

I've also had to push some other client projects back to get this done. It's really irking me to tell these clients "Please wait while we get this done for another client", but what can you do when the company only has 1 developer?

Anyway, I'm gonna call it a night and head to my friend's party in Asheville.

Today was a fairly successful day. I worked on the NSMT system a bit and got the Shuttle Service 80% complete. I also revamped my ToDo list, and now have it squared away better. And HEY! I even got today's blog entry in.

The reason for the title is because I researched, learned, tested, and successfully implemented a Google Maps API today for NSMT. I applied for a Google API key for the site, found some test scripts, and customized the scripts to return the road distance between a location and their office (my first script only calculated the direct distance, but I'm guessing my client wants the "Road" distance, which makes more sense). I also used those variables to calculate rates based on their service charges. Best part of all: it works in all browsers, even IE!

I also researched a JS function to detect if you're using IE (which you shouldn't be, anyway) and if you're using IE 8's compatibility view (which you ALSO shouldn't be either). Turns out that NSMT tested the "Request a Transport" system we created at a local school, and the majority of students were using IE8 with Compatibility View! What a nightmare for Web Developers! Luckily, the script successfully determines if IE8 Compat. view is on, and how to remove the site from Compatibility view standards so it runs better (IE8 and html5 were hard enough, and now we have to deal with Compat. view!)

I also browsed the internets some and found a lot of good stuff, like the live feed of the Firefoxes at firefoxlive.mozilla.org and the 24-hour broadcast of Keyboard Cat at exitthroughthepetshop.com - how entertaining! (not sarcasm)

I actually got a 20+ increase in twitter followers this week, which for me is great! Usually, I see a 1-2 increase, but to see a 20+ increase was amazing.

Oh, I also finally beat "Ratchet & Clank" yesterday. I got it Friday(?) and beat it last night. The last boss was a killer, but after I realized I had the PDA to order weapon reloads on-the-road instead of running out of 1 type and using whatever I had left. It actually worked better to use my Blaster (200 mini-shots) first, then use my Devastator (20 big shots) to kill the boss. The first 10 tries or so, I would use the Devastator and keep reloading, but the PDA charges a convenience fee to restock, so it was 2000 bolts each time. After I realized I could use the Blaster first, I killed him on the first try. Now I can go back and get the RYNO and Tesla weapons and get them free in R&C: Going Commando and R&C: Up Your Arsenal.

Where did Friday go?

It seems just like I woke up an hour ago. Although it felt pretty good to sleep in till 11am on a day off (I know, I know....some of you are saying "Sleep in till 11? Half of the day is already gone! How can you stay sleep past 8am?" - as a programmer, my best work is done between 1-3 AM (as the SunTrust commercial goes, which is true), and sleeping in between 5am-12pm is normal for me).

I worked on a few web-based cosmetic items before lunch, mainly on my blog, and got some coupons for Hardee's. Afterwards, went to Goodwill and found some really good items (won't say what specifically), and then heading back home.

Keat and I watched the end of Psych season 3, and started season 4. Always a winner, always will be.

I fixed a lot of issues on the blog, along with added the twitter feed and the entry editor. I also fixed a server issue with Fire & Ice fest site, along with the NSMT test site.

Friday didn't go as planned. I expected to have a lot more work done today, but what can I say? Friday was here, and now it's gone.