Turkey-day is over! Time for Black Fri.....zzzzzzzzz

Although today was a rather good day, I had the hardest time sleeping last night. Can't quite figure out the exact reason, but Keat was up at 7 and stayed up with her dad. Apparently, I slept in, and so did her mom (not in the same room, duh). We spent a lot of the day watching TV and cooking for the evening. We were supposed to go on a hike this morning, but Keat's dad said it was raining, so we didn't go. TV consisted of the Macy's Day Parade until noon, and then we watched Food Network until it got a little boring and had to get ready to leave.

Thanksgiving dinner was fun. I had a lot of intellectual conversations with a lot of Keat's parent's friends. Even though I miss my family on this day of thanks and gathering, it was good to have a little variety instead of the same people and the same food every year. Since I spend last year and this year with Keat's family on Thanksgiving, I'll be going back home next year to liven things up a bit.

While dinner was digesting, the last thing on my mind was......drum roll please.....Black Friday. Sure, the deals are outrageous and you can get a bargain on just about anything. But after actually working one Black Friday at [a certain retail store] back in '04, I never want to be around another black friday again. I mean, people wait outside stores in the freezing cold for hours on end (sometimes days on end; some people actually camp outside of stores for good deals, and there is even a guide to camping for Black Friday! How crazy is that?!), rushing inside as soon as the doors open, the employees shiver at the amount of customers (or the 'newbies' get over-excited), there isn't any room to move for 1-10 hours, the cash registers are ringing off the hook, and everybody is grabbing, talking, asking, demanding, and screaming to get their item they waited so long for. In addition, the stores only get a limited quantity (from 5-100) for certain items, and most stores don't offer rain checks, and most people think that stores do. Sorry, if the store runs out on Black Friday, forget it - you ain't gettin' it, no matter what you do (complain, hold your breath, complain, write/call the president, complain, demand better service, complain, talk to the manager, complain, talk to the manager about firing the employee because the item isn't in stock, complain, ask for a rain check with a "pretty, pretty please....with sugar and a cherry on top", etc........did I mention "complain"?).

I was actually browsing FB after I got back to the house, and found one of my old managers (who doesn't work at [a certain retail store] anymore, thank goodness) posting something about Black Friday. I just had to comment on it. 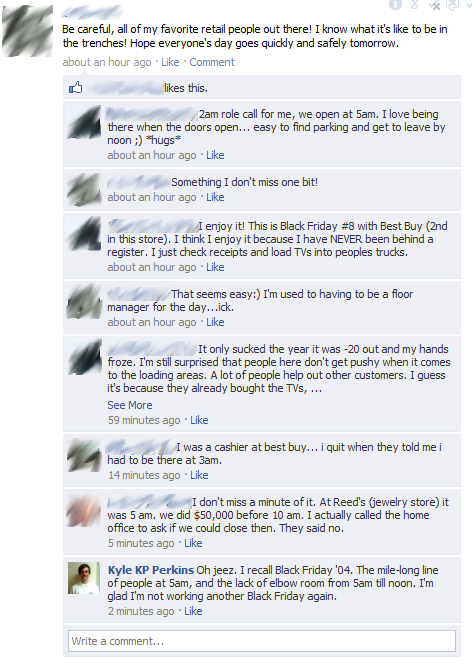 Names and Profile Photos blurred for security
As I said, after working only one Black Friday, I never want to work it again.

If the stores actually want to create....no, wait. Let me do a comparison list first:


....at least they have stores opening up at various times instead of everybody opening at 5am this year. Hopefully, the after-hours traffic (meaning noon) may not be as bad as leaving a sold-out concert while everyone is on RedBull steroids.....just saying.

On to a different topic, I'm not quite sure what the plan is for tomorrow. I think we're visiting an Alpaca farm, but I'll just have to wait and see.

I have a perfect comic for tomorrow to deal with the plague called "Black Friday", but you'll have to wait till either after midnight or tomorrow evening till I post it.

I do miss the kitties. I wonder how they are doing.

Turkey is setting in.
Night world! I'm NOT getting up at 4:30am to work anything. I am sleeping in till a decent hour, then doing something enjoyable.

Although I'm not getting this in before midnight, I do believe that I should get this done before tomorrow starts. Bear with me...

Last night was a pain. It seemed like I couldn't get to sleep - tossing and turning, trying to get comfortable, staying warm, and....Chi meowing downstairs. Although I did have a few dreams, I believe Chi was meowing away last night as her "heat spell" was dying down. I sure hope it is over soon, because it is getting really annoying with the Siamese-volume meowing and constant "marking" all around the house and anything on the floor (I mean, even with a TOTALLY clean litter box AND being house trained, she still pees on random things while in heat).

I gotta say: This 2-day work week is really throwing me off. This morning, I was planning for what to do on Thursday and Friday. After I asked a few questions about using certain cars on Wednesday, Keat said "I don't have classes on Wednesday!" Then it hit me like a brick soccerball (because a "ton of bricks" would kill me). Thanksgiving break starts Wednesday and we're heading out, so (knowing how things will go down) work won't get done between Wednesday and Saturday. I hate putting work on hold for that long, especially when I'm on time-specific deadlines.

We left at 8:59am, and it usually takes us 22 minutes to get from the apartment to get to the office and/or school for Keat. Somehow, we arrived at her school at 9:16am. Don't quite know how that happened.

Anyway, my day was busy. Along with catching up on the weekend tasks and reading my RSS feeds (aka: my "daily digital newspaper" - should call it my "DDN"), I decided to go ahead and start the server upgrade process. Although it upgrades the main hosting server from a 30GB space to 50GB and Red Hat RHEL 3AS (which isn't supported anywhere, and it seems it hasn't been for about 2 years), to CentOS 5 (32 bit) which is something I can certainly relate to since the main operating box at the office, and the box in my home office both run off of CentOS 5 (32 bit). Can't complain about that.

I spent a lot of time talking to the hosting support staff on how to get the upgrade done. It seems pretty seamless from what I understood. I purchased the upgraded server space, but waited to initialize the domain and file transfer from the old VPS to the new VPS. Although I had both VPS's set, I wanted to proceed knowing that all bases were covered before I was slapped with some "unknown" fees. I was about to get things going until....normal business called.

After I sent out a mass message on FB asking people to "Like" Shadow Dev, I received a tip saying that a local competitor may need some help. Long story short: the business owner opened up a new business (while operating the current business), and things seemed to fall behind. The tip suggested that we offer our services to them in a non-competition agreement. I said that I'd think about it, and may attempt to contact the owner after Thanksgiving, allowing the holiday chaos to calm down a bit. Odd request, but what the hey?

I also received some updates from a client concerning some cosmetic items and photos. The photos they sent were to be used in the main slideshow on their site. All were good photos, but I could only properly use a few of them. There were also some issues with spacing and photo placement, but nothing unusual from normal day-to-day activities.

I went to Arby's for lunch, which was good for variety, but I swear: their "Value Roast Beef" looks like (Bread + Air) + 1 thin slice of Roast Beef + (Air + Bread). I've always been an Arby's fan and loved the Big Montana sandwich back around 2002 (which I believe is now a #4), but this was a little unacceptable. I wish I got a photo, but I was so hungry I didn't care what it looked like. I'll get a photo next time (I also dowsed it in Arby's sauce so it actually had some flavor). Their chicken is still good though; fresh, crisp, and thinly breaded. Pure flavor there. And love the curly fries. Mmmmmm.....is there an Arby's open this late?

After Keat and I got back to the office, I read an updated headline about "including your Facebook URL on your marketing materials" and thought "there's no way I can fit our super-long url on our marketing material. How can I fix that? Hmmm. Oh! Unique Facebook URL! Ok, how do I get it?" I recalled a re-tweeted tweet from a local competitor trying to perform a "social experiment" to gain 25 "Likes" to get a "Vanity Facebook URL". Not a bad idea. We had a few "Likes", and I knew it would take a while to get to 25. I thought "If they could do it within a few hours, so can we. Let's see what happens."

I posted the first "Like Us" post on my profile, Shadow Dev's page, my twitter, and Shadow Dev's twitter (turns out that auto-made shortened FB links don't always work) at around 3:30pm. I posted updates on how many followers we had and made sure to be at the top of the "updates" list about every 30 minutes or so. After multiple update posts (and probably the point that most of my friends were tired of me), we reached 25 followers at 8:30pm and I got Shadow Dev's own Vanity Facebook URL at facebook.com/ShadowDevelopment (30 characters) - what a space saver (instead of facebook.com/pages/Waynesville-NC/Shadow-Development-Technologies/30328325855, which is 77 characters).

After that happened, I offered a 10% discount to all new customers who are Facebook fans, in order to show my appreciation of their support. Honestly, I think it's a great deal. Like us = save 10%. No coupons, rebates, or special conditions. I recall Land's End had a similar deal for me when I was ordering the shirts. The lady on the phone said "Can you go to the Land's End website?" / Me: "Yea" / Her: "Do you see our main special on the front page?" / Me: "Yea, the one about logos?" / Her: "Yep. That special allowed you to save on your logo setup fees. Congrats." / Me: "Really? Wow" / Her: "Yeah, it's that easy." Why not give a little incentive to some fellow facebook fans?

Keat and I picked up some dinner and went home after that and caught up on some of our favorite TV shows. However, Keat made a good point while we were picking up dinner. She and I were talking about the Direct and Indirect competitors for Shadow Dev. Although I had a rudimentary understanding of direct and indirect competition in my 1 Marketing class while in college, I don't believe I got a lot out of it since I was preoccupied with ScrumIt and Nascent (when the idea of riding the Indy Speedway in a Limo is in your head, nothing else really fits). It has been determined that Keat knows a heck of a lot more than I do at marketing, and that is one of the many reasons she's studying Marketing and I'm studying Operations. I'm going to leave just about everything "Marketing" to her and do what I can with what I have.

Back to the shows: Futurama had a new special out yesterday, and we watched it online (comes out 1 day after air showing). That episode was.....a little weird. After that, we watched The Simpsons, Family Guy, American Dad, and The Cleveland Show. Although they had good stories, it certainly seems like Matt Groening, Seth MacFarlane, and their writers are stretching to find good quality stories.

I just realized a whole 1 1/2 episodes of Futurama have played while I'm writing this (we sleep to Futurama in the background). I'm gonna sign off before this becomes a term paper.