It's the end of the week, so TGIF! Although it's been a pretty rough week, it's also been fairly productive. First, before I get into details, here's a comic:

I thought I'd offer a new comic. This one is Yellow Peril, a fairly new comic I've started liking.

Anyway, on to the activities: As the title conveys, we received a new shirt design today! YAY!

Honestly, it was a prototype design, but it came out REALLY well! I've started offering it to people via inspiration from CloudFlare.com.

I've also become a big fan of 4 new bands: Porcelian Black (heard their new song on the radio when we picked up Pizza last week), Paramore (they are covered often on Pandora, so I thought I'd create a station for them - still good), Flyleaf (good stuff), and Fireflight (more good stuff). I've never been one to cling to new artists, but these guys do it right!

Anyway, I've re-connected with an old college friend today and found out that she joined the SCA yesterday! Small world, huh?

I'm having a small issue with SSL certificates for a client. I ordered it through our Server company, which orders it through a 3rd party, but it turns out the 3rd party either sent it to the wrong place or didn't sent it at all. Our server company is trying to help us solve the confusion (and I hope soon, because the client's temporary SSL expires on May 10).

I don't recall much of what happened yesterday, but all I know is that I'm working on a mobile version of this blog. It's not easy, since I have to deal with cached pages from CloudFlare (the "developer" option doesn't work as well as I'd hoped), but I'm working with a direct input of CSS instead of an external file. After it's ready, I'll switch the include with the and things should be good as gold.

Anyway (again), I'm off to Asheville to meet up with Keat and another friend at the mall. Till next week

No, I'm not talking about the Windows DOS, I'm talking about a Denial of Service attack! Yes, between 10am and 1pm today, our company website, shadowdev.com was down. And the worst part is: all of our client sites (and 3rd party websites) that referenced information on our company website took forever to load because they couldn't find the information our site was providing. Here's the Pingdom report from today: 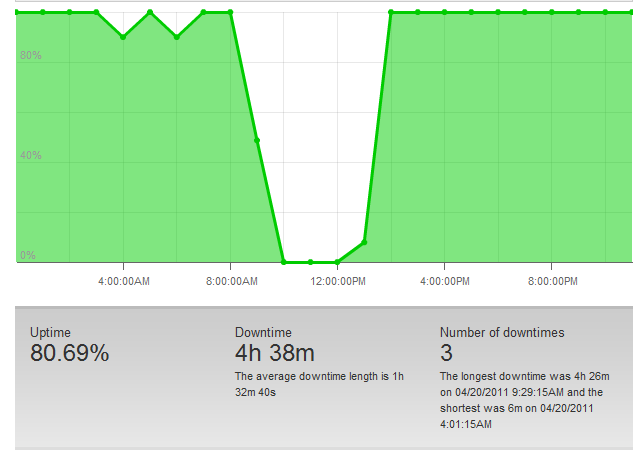 Not the best way to spend 4/20, but after finally getting a report from our server hosting company, it turned out that 7 users were accessing the Shell at the same time (with close to 500 requests each), causing the server to allocate all resources to the Shell responses and not allowing the site load properly.

I've never experienced a DoS attack before, but it is not something that I want to deal with again. The oddest thing was: the other sites on the server worked fine (aside from some longer loading times). Out company site was the only one not loading, which is why I thought it was originally a DNS issue. I don't want to say anything about our DNS provider (CloudFlare) since they have been great so far, but based on my experience, that's the only option I was left with in determining the error. The support from CloudFlare was extremely helpful and helped as much as they could, but when our Server folk told us the multiple IP's were the issue, that ruled out any DNS issues.

DOUBLE UPDATE!!! I know I just posted an entry, but I was doing some in-depth analysis and found a major improvement since I switched my DNS records over to CloudFlare. I've posted some reports (by Pingdom.com) that monitor my main site, shadowdev.com, and give me more detailed results for how the site has been doing (server-wise, not user-wise - Analytics are for that). 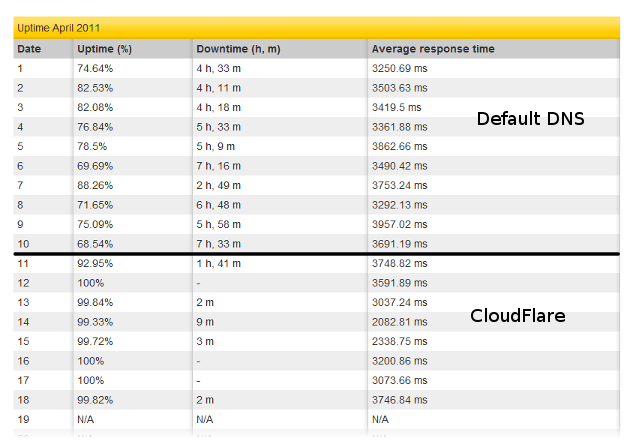 This isn't a sponsored post, but I wanted to say how happy I am with the CloudFlare DNS service. This is almost as good as my old server, when the uptime was 100% all the time, not between 20-90% depending on the phase of the moon, what hour it was, if the stars were aligned, and if I even found Wonka's golden ticket.