I thought this would be a good time to let everyone know about the recent changes/progress that have been going on. First, Shadow Development is going though a business transition (as mentioned in my previous post).

Shadow Development is transitioning from a "build websites for clients" to "designing, developing, and maintaining online services" (so, basically, a "software development company"), as the underlying reason since 2005 has been all along. Now, we're serious.

Out with the old office

As of August 31st, 2013, we have moved out of our office. Yes, the new office that we moved into in January, we have officially moved out. It wasn't because we were evicted or anything, it was just a combination of multiple channels combining their worst moments at once (we had half of our client base leave, invoices weren't getting paid to us, staff members were losing their motivation, increase in bill costs, etc). After crunching the numbers, it was better for us to leave the office and go virtual instead. The whole "working at home" thing is nice, but it has its drawbacks.

A "State of Shadow Development" press release should be released on the main site soon. Edit: Here ya go

Over the past week, I've actually been doing a lot of work on code. I've revamped the Shadow Dev Beta Site, which has a whole new theme and concept versus its previous incarnations; I migrated the old Shadow Dev design to the Lunar Productions Beta Site, which worked out quite well, and I fluffed out some extra images to give the site some makeshift content to view; I worked on the wedding site a bit to get it up and going (I was inspired by WeddingWoo examples for a new concept, since the old concept was a bit...well, drab); and additional work here and there on various aspects.

Although, right now, I'm very confused at the main hosting server. Here's the rundown: last night at 3am, our legacy server at Website Source finally kicked the bucket (at our discretion), which means no more $200/qtr for hosting on a "maybe it's up, maybe it's down" kind of hosting environment. Although, about 5 hours ago, realized that the old legacy server was also handling the MX records for our mail. Once that was gone, well, so was our email accounts and forwarding. Therefore, I had to initiate a server system upgrade to the hosting files of the primary shadowdev.com domain in order to set up the new email accounts. (Yeah....that sounded like gibberish. - by the way, I updated the DNS records to have the MX records point to the new server, and I just received an email that was sent at 3:27AM today. 17 hours in limbo - wow!)

When I initiated a system backup to my local machine, my SFTP process stalled. I tried to connect via SSH, and I kept getting timeouts. I was furious since I basically had no "editing methods" for the server any more! After finagling for a few hours, I thought "what if I disabled the Wi-Fi on my phone and tried to SSH with that?" (from previous experience from a similar situation). I did so, and was able to SSH in no time! So, that just meant that the server wasn't accepting FTP (port 21) or SFTP/SSH (port 22) from my IP address.....again.

I've checked the iptables and even enabled a complete system access acceptance for my specific IP address. I made sure ufw wasn't enabled, as that was the problem before. I rebooted the server multiple times (that usually solves it). However, nothing was working. So, yeah, I'm still trying to figure that out.

To change up the tone a bit, I've been working on some wedding plans for me and Keat. With Keat in school taking 18 hours of classes (and working on homework every night), she doesn't have much free time, so I've been self-appointed with planning the wedding.....yay.... (for clarification, Keat is in her last year of school, so that's a little more important for her right now) 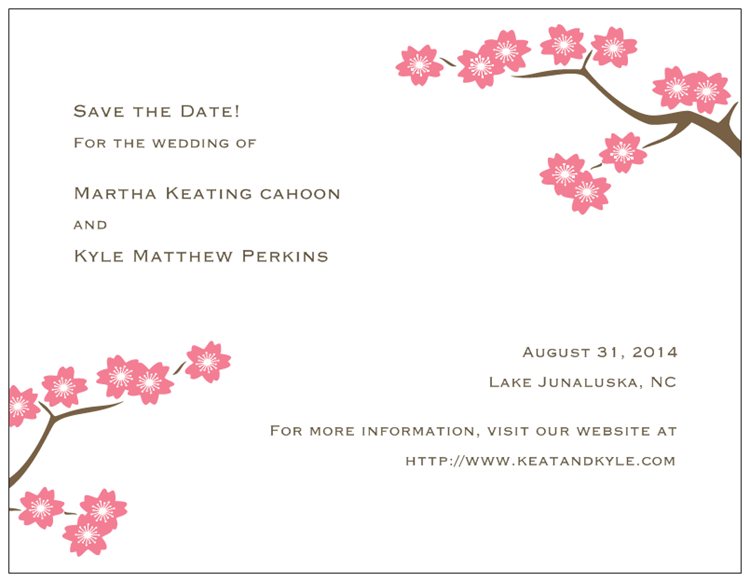 Here's what the plans are so far (and you can find more details at kk.shadowdev.com - the real domain will be acquired later, just so people checking it in September 2014 aren't cut off, and we aren't paying an additional fee for a year to have the site active for 2 months):

Ceremony: Lake Junaluska, August 31, 6pm
Status: We have talked to the coordinator, have the contract, now we are just awaiting "approval" from Keat's parents to move forward and submit the contract

Reception: Waynesville Inn, August 31, 7pm
Status: Everything is pretty much set, we just need to straighten out the food budget, get a quote on bringing in additional alcohol, and get the contract (again, Keat's parents)

Apparel:
- Keat has her ring and is paying for it
- I have placed an order for my ring, and should receive it in 3 weeks
- Keat and her mom are shopping for a dress (this is all her)
- My tux order has been placed, and I am paying it off
- Best Man has his own tux, but is getting some additional items
- Rest of Groomsmen need to be fitted
- Bridesmaids have been picked out, now for "Bride Discussions" (not my department)

Flowers:
- Quote has been received, and vendor has penciled us in for the day

Photographer:
- Quote has been received, details will be discussed in person in October

Music:
- Music selections have been selected, but waiting on professional opinion before finalizing (see next bullet)
- Musicians for ceremony have been ordered (friend of mine), quote received, details discussed this week
- Reception location is providing DJ

Budget:
- We are estimating a $12,000 total budget (let me explain: I am tracking the budget, which is split up in "Estimated" (what we expect) and "Actual" (what has been spent), and then it is sub-split into each party pay area: Keat's parents, my parents, and us. We're looking at $10k for her parents, $500 for mine, and $1.6k for the two of us)
- I'm also keeping track of all of the finances (what is expected, what will be paid, what has been paid, outstanding amount, additional fees, etc)

Cake:
- Appointment is being made with local company for tastings (and possibly ordering, based on the high number of recommendations from others)

Gifts (what we will give the people in the wedding):
- Have been looked at and budgeted, but not ordered yet

Favors:
- Decision made, quote received, but not ordered yet

Officiant:
- Quote received
- Finalized on date
- Travel costs will be covered
- "Pre-marriage Counseling" has begin with a 126 question "Inventory" list (we both fill out questions about ourselves and each other, then discuss that with the Preacher)

Salon/Spa:
- Prices have been estimated, no decision has been made yet

Hotel:
- The Waynesville Inn is the plan, but one thing we did not expect to encounter was "higher hotel rates for the holiday." Yeah, big overlook on our part. The Waynesville Inn's "Group Rates" (if we can guarantee 10 or more rooms) would be $130/night. I'm hoping that other hotels around us can provide lower rates.

Wedding License:
- Will go in July 2014 to receive from the Haywood County Registrar of Deeds office. $60 flat, no physical/blood tests required.

Wedding "Day Of Schedule":
- Schedule has been planned, tentative timeframes have been scheduled, awaiting discussion from other parties and vendors of finer details

I believe that is it so far. So, yeah, I'm the "wedding planner" for this big event. I have absolutely no idea how the Bride is supposed to do all of this, as you better be damn well organized to keep all of this in order. I've been to some excellent weddings and some way-below-par weddings, and my expectation is for this day to be outstanding and (hopefully) I can recall it in 20 years (I barely recall my own high school AND college graduations since they were so hectic).

I'll post updates when I get some and can clarify a few things.