Last night was a bit of a doozy. I spent most of the night watching Season 3 of Reboot. Apparently, I haven't seen that season in quite a while, because nothing looks familiar.

Well, the good news about yesterday is that the Internet came back. Long story short: I have no idea why it came back.

Long story: On Tuesday, the internet went out. So I found the most recent paper bill and saw that "If $4.55 was not paid by 3/25, then service would be cut off". Since the Internet was out, I couldn't pay the bill online, so I had to use my phone to do it. Good News: Charter has a mobile friendly site. Bad news: their payment system doesn't work on mobile (and I have a market smartphone, so having an "Unrecognized device" was irrelevant). Since I thought that the bill wasn't paid, I freaked out a little and paid $150 to cover the bill cost. That charge went through successfully, however, since it took 24 hours to process, I was internet-less on Tuesday night.

I came home yesterday and I find out (to my surprise) that the Internet is still out. I logged on to Charter's site from my phone, and somehow, the billing system says that I paid $150 at the beginning of March, so I have a credit of $78, which means that I overpaid. If that's the case, where's my Internet?

I called Charter and said "Internet is out", which apparently is a key phrase that starts their automated system troubleshooter. After it automatically ping'ed and restarted our modem (which was the first thing I did along with power cycling the router), the Internet came back up.

Miracle? Probably. But I didn't do anything to fix it.

Today started out weird. I first had a call from the building Director that his computer was acting up and some program was making him buy some antivirus software. As soon as I arrive at the office, my first question to him was "Were you using Internet Explorer"? His response (of course) "Yes, I think so". Found the problem.

So I booted into Safe Mode, found the location of the issue program, removed it and all traces of it, cleaned up his computer, scanned the registry (Thank you CCleaner) and rebooted. Problem solved.

I told him (for the xth time) to use Firefox or Chrome to browse the internet because IE is bad and etc, etc, etc. 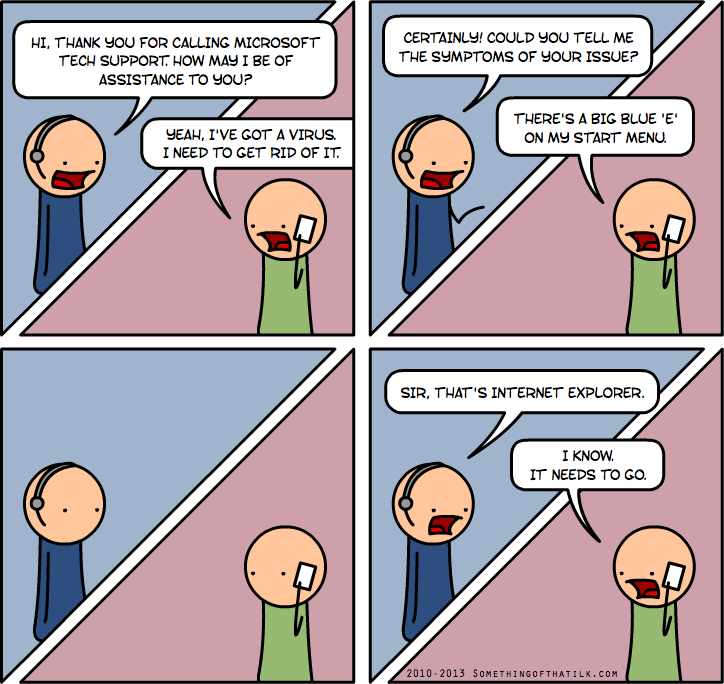 As you may be able to tell, I don't like IE - the fact that over 80% of the world uses it and having to develop for Microsoft's excuse for browser standards.

After that was done, I played catchup all day, including re-convincing a client to not pay extra for SEO services again (let's just say that the client paid somewhere around $2000/yr to a company to perform "SEO Services". Translation: they added some Google Analytics code and provided meta tags for pages (which were very poorly written and irrelevantly coded). As I told the client, "this is 'first year developer' stuff. There's no need to pay somebody else $2000 for this when we do it for you". I have been told by the client (again) that she will contact the other company and cancel the service. Here's hoping it turns out better and doesn't come up again.

On the brighter side, my Raspberry Pi came in! 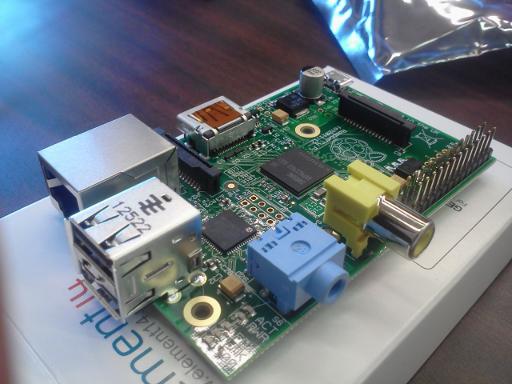 At first, I thought: provide power, connect network, all is good.

However, nobody told me I had to configure it myself.

Here's what I have done: provide Ethernet cord, Provide power supply, go to raspberrypi.org/downloads, download OS, dd'ed it on SD card, provide USB keyboard, provide RCA cable (I don't have any HDMI TV's), connect everything together, (here's where I am) boot from SD card, set up OS, configure system, and then ready to go.

So far, I have everything, but I'm not sure if my SD card (which is in the form of a 8GB Micro SD card in a SD Card reader, which is in a SD/USB dongle to write with) is working right. When I plug the SD card in and power on the Pi, the red POWER light comes on, but nothing else. Even by connecting the RCA Video cable to the TV (and making sure it's on the right input setting), still nothing. I'm supposed to get a green LED to light up, but no luck so far. I think I may need to get a full fledge SD card, which nowadays are pretty cheap.

Other good news: our peppers are finally coming in! I took a look last night, and 9 sprouts are coming up! 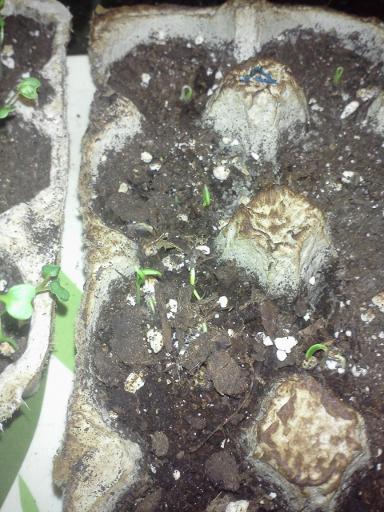 I've also started watching Breaking Bad - not bad so far. (Sorry for the pun). I'm halfway through episode 3, and it is still keeping my attention.

I also did some research on Zero Hour, found out it was semi-cancelled. Can't same I blame it - the first episode dragged on, set up the mystery at the very end, and basically told the whole story in the first hour of show. I like a quote from The New York Daily News' David Hinckley stated the series "dodges several bedrock problems that have torpedoed other recent attempts to make engaging series TV out of mystery thrillers", adding, "The question is whether Zero Hour can sustain [the setup] for 13 weeks, because what makes a good two-hour movie doesn't always make for 10 gripping hours of television." (wikipedia)

I'm going to see what I can scrounge up tonight on the server and call it a night. Good thing is that this is the last night I will be spending alone for a while. In just over 25 hours, I get to pick Keat up from the airport! YAY!