What happened to Friday? And Saturday?

Sorry I missed Friday's update. It was a hectic day and I had such a headache after I got home. I'll explain it in a bit. I don't recall what happened exactly, but here's the best I can remember it.

Friday
I was supposed to wake up at 9ish and go to an auto-repair shop to get my tie-rod checked out. Turns out I woke up around 12ish and went over to the shop. After I walked in and explained the situation, the guy came back and said he didn't see anything wrong with it. I called Dad and he said "Just as I thought." Great. So the auto place I went to first either lied to me or was trying to gouge my wallet. Either way, I'm not going back there. Dad said he'll file a complaint with the BBB, but personally, I don't know how much "good" that will do since I found out that they aren't BBB Accredited over lunch. Keat and I went to lunch at Hardee's and then went to the office. We spent about an hour there, and I worked on the server configuration trying to make the subdomains work right. Turns out that there was an issue with the configuration file saying "Indexes" and "+Indexes", which was the main issue.

I also received a potential client contact and responded accordingly. A teammate from Keat's business class called and asked a few questions for the business paper. After the discussed options between us and her, I would like to get a copy of that paper; the things said in that paper would be a great media content!

Keat and I left from there and went to Barnes & Noble for some market research (class-related for Keat), and I got some hot cider and Keat got some hot chocolate and some cheesecake. After taking the cider and cheesecake, I didn't think life could get any better....

Keat and I browsed the mall for a bit, then went home. I had a small headache that turned into a large headache, and at about 12, I went to bed. I thought I would fall asleep before the intro to Futurama was done. I skipped the blog post and went to sleep.

Saturday
I woke up around 12 again, but it felt great to sleep in. Keat and I went to the store to pick up a few things, got "Grown Ups" and watched it (which was a great movie, by the way). I returned the returned the Redbox and came back home.

I also found out that the support guy responded to my email from Friday, after I told him about the "+Indexes" thing and mentioned the constant downtime issue. He responded saying the following:

Yet, I didn't need to clear the browser cookies (I'm not stupid) since I checked the subdomains with 4 browsers on 2 systems (one local and one remote), and still nothing about the downtime issue I mentioned earlier. I replied saying that that subdomain issue was solved, and I needed to investigate the downtime issue, and received this:

No real reason why the download thing happened, but I still have no response to the downtime issue. Overall, the downtime has been 1-2 minutes every 30 minutes or so. What "support!"

Just FYI, here's the uptime and downtime report as of now (over the past 5 days): 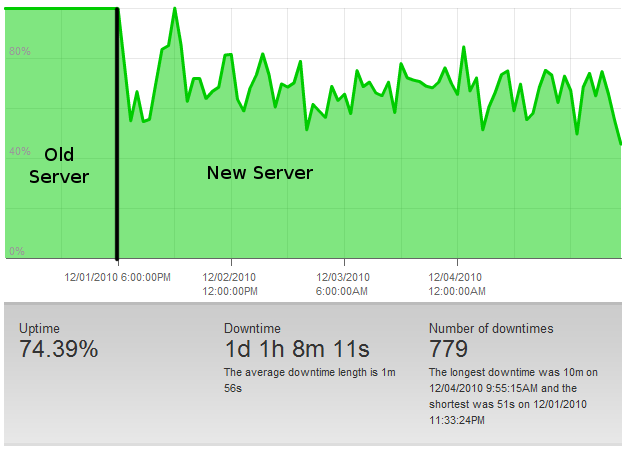 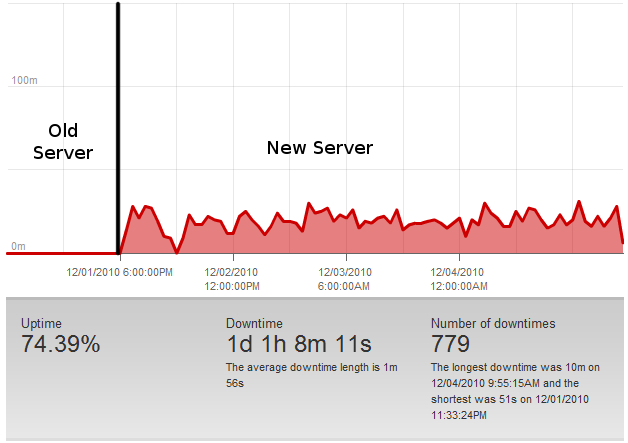 As the day went on, Keat and I got some Papa John's pizza and watched some American Dad. We're now on Season 3, although I believe we have actually seen all of the episodes. The biggest thing that keeps bugging us is that our neighbor's dog has been crated alone in their apartment for 24+ hours. I'm pretty sure that's a little inhumane. The dog loves people and doesn't like to be alone, and the constant howling is getting on our last nerves! Keat wants to get in there a free the dog, but that would be against the law. We've sent an email to the landlord(s), but they most likely won't get that until tomorrow (if that early). The Internet has been slowing down every now and then, so Netflix has been 'nixed for the time being until things get faster. I just hope the dog goes to sleep soon. It doesn't really help to crate the dog, then leave all of the apartment lights on and the blinds open so everyone can see the dog inside and the dog can see everyone outside.

It also doesn't help that it seems that Chi is in HEAT again! She was meowing like crazy on Friday night and has been meowing her head off again today (and peeing everywhere). It was only last week that she was in heat, so this seems impossible for her to be in heat again. I actually had to close the bedroom door on Friday night because the meowing was too much. Little did I expect for Niko to be scratching under the door again after n months. The under-the-door scratching wasn't too bothersome, but the fact that he scratched under the door and shook the little springy thing (you know, the thing that protects the door from hitting the wall), which made an annoying "SPROOINGGG" noise.

One final note: I received another note from Progress Energy saying that they couldn't process my account. They have a direct connection to my bank account, so they can't say "Can't find account number." Aside from the howling neighbor dog, Progress is also getting on my nerves.

Let's see how the rest of tonight goes, and hopefully things get better. Keat has some homework she has to get done, so she'll be spending all of sunday doing that. I'll most likely be implementing the cURL system that I need to get done. Until then, 'night!