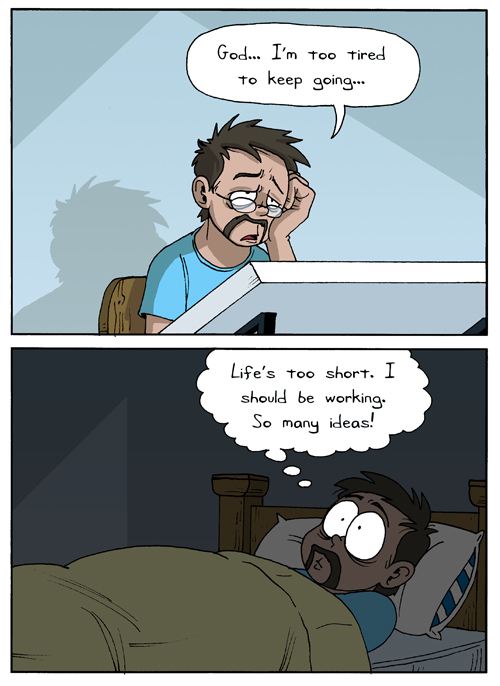 I had a case of the Tuesdays

I know it's Wednesday, but this first portion deals with YESTERDAY. Deal with it. After I posted yesterday's entry, Keat and I went home. Nothing super special, but it started raining. Hard. We went to Ingles to pick up some dinner, then got back out to the car, and the stupid car wouldn't start! Since the RKE doesn't respond anymore, we have to open the car with the key, which causes a mini-alarm to go off for a bit. After about 10-15 seconds, the full-on "HEY! I'M BEING STOLEN!" alarm goes off. Which it did. For 10 minutes. The stupid key wouldn't turn in the ignition. So here we are, holding groceries, in the hard, wet rain, trying to either disconnect the car battery and/or start the car. The car finally started and we were off. Soaked, but wet.

ANYWAY, there were a few comics in the past day that I liked, so I'll be posting them throughout the week. Here's the first one.

Haven't posted a System comic in a while, but what the hey - I thought I'd do it.

On to more technical stuff(s), I had an idea for a developer-friendly MySQL error notifier, since mysql_error() only works on the front end. My proof-of-concept that I developed yesterday really worked! And I'm so happy! Here it is for anybody to use.

I'm really surprised how well it works for just a proof-of-concept. I told Keat last night that I must be getting really good at this "programming" thing. I used to think of an idea, write it down, write the code in 15 minutes, then spend 2 weeks debugging it. Now, my 15-minute code sessions work like a charm from the get-go. I must be doing something right....

Here's the overview of what I got done today:

...and that's about it for now. Till tomorrow!