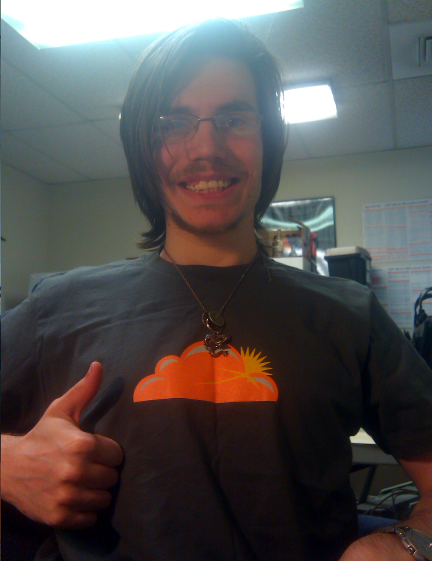 Squeezed this one before February hit with just a few hours to spare!

It seems like just yesterday I was making my last journal entry, but I mean WHOA! It's already February. My last entry was on Dec 11, the day that my internet provider left and I haven't had internet at home in.....wow, almost 2 full months. That's, like, forever in Internet-land. It's really a strain when you have a lot of work to do ON the "internets" and when your clients are breathing down your neck to get stuff done, but you can't get anything done because your only stable internet connection is 30 minutes away (I'm speaking of the Office, here) and you're snowed in so much you can't even leave the parking lot! Yeah, it's been a hard 2 months.

I won't go into any fine details, so I'll just cover the basics in 60 seconds or less (I hope). *big breath* Here I go: Keat and I went across the state (twice) for Xmas, had fun with my sisters and their signifiant others (and accompanying children), got a few gifts for Xmas, spent New Year's at Keat's parents' and met Thomas' new girlfriend, shucked oysters (fun), came back to Raleigh, found out that I mixed up my Secret Santa person (oh well), came back to Asheville, got snowed in for 2 weeks (not fun), got Chi fixed before Xmas (semi-tragedy; almost lost her (temporily misplaced, not due to surgery)), finally got into work and have been working for 2 weeks straight, Keat is back in school and it's kicking her butt, doing well with the Shadow Dev Newsletter (yay - committment!), got 2 new Ratchet & Clank games (spent many wee morning hours playing those), signed up for FourSquare over the holiday, got tired of it, stopped doing it, attended many, many seminars over the past few weeks, started a new service Receipt Rescue (which seems to be progressing well), worked on client stuff (did I say that yet?), trying to shrink my to-do list, worked on Neko Sentou and 50% through Vol 12 (YAY! Check our story progress at Lunar Productions), participated in my first PiLam Omega Zeta initiation after 2 years, and we are moving to Waynesville in the summer since Keat's transfering (hoping) to Western in the fall.

Was that 60 seconds? Probably not, but that's a lot easier than filling x number of pages with finer details.

Over the past few weeks, I've been working on NSMT's request system. After a (literal) system overhaul with some finer tweaking, the system is finally finished (99.9%). Technically, it's done, but I'm revamping a record modification system with jQuery and it's taking me longer than expected.

I've been working closely with QR codes on the Shadow Dev site for today (take a look at the QR Page I created - I think it's pretty cool), and replacing the images with image sprites (to reduce the server hit response; in laymen's terms: 10 images produces 10 hits, meanwhile 1 image sprite with 10 images used 10 times produces 1 hit - smaller server response time, faster loading, and more accurate analytics). I'm also working on NSMT's Shuttle Service, which is a new service they want. May take me a few more days to get that finished.

Just saw Inception, and that was pretty good. It took a while to get into it, but once you got into it, it's like a roller coaster ride (same goes with The Men Who Stare at Goats).

Oh yeah, I have been receiving a butt-load of spam-bot comments on the blog. I finally revamped the comment system to strip out a lot of what the spam-bots were sending in. I used to receive 1 email every 30 minutes saying "New Comment" with the content of (but not limited to): free poker online, certain underage adult actions, enlargements of a certain male body part, getting 1000 Facebook fans (tons with that), "I like your site and visit it daily" (if they really submitted that, they would realize that the blog hadn't been updated in 2 months), and various other spam-bot-like material. They're getting really desprate and/or creative. I like to think the first. Anyway, since I revamped the comment posting system and implemented some new filters, I get maybe 1 spam-bot a month now. Nice to have those multi-level filters in place.

One last thing: finally met Janet at the Specialty Sauce place down the hall. Turns out that she and her husband(?) owned the Sushi restaurant down the street for 16 years. They had to leave since a nail salon moved in next door and the toxic fumes were getting into the restaurant - not a good experience. However, it turns out that she's a semi-expert sushi and nigiri maker, and she's making/selling sauces since her restaurant is kinda downhill right now. She also said that people from all over the area went to her specifically to have sushi (even people in Sylva, Asheville, and even Robinsville (where the heck is that?)). Can't wait to try some of her sushi!

I'll try to keep up with the postings as much as I can. Till later.